The Crossroads of Tobacco Control

Home » About Us » Blogs » The Crossroads of Tobacco Control

Tobacco has dominated headlines lately. On Wednesday, CVS pharmacy announced that it will stop selling tobacco products by October. Some localities, such as Boston and San Francisco, already prohibit the sale of tobacco products in pharmacies. But it’s big news for a major pharmacy chain to voluntarily join the thin ranks of Target Corporation and a few others, deciding that none of its stores will sell tobacco products — the leading preventable cause of premature death in the U.S. Hopefully other health-oriented retailers and big-box stores will follow suit, particularly stores — like Walmart — that are often visited by the people most affected by tobacco.

The CVS news came just one day after the FDA announced the details of its new youth-focused tobacco prevention campaign (hitting the assorted airwaves on February 11) and less than a week after the CDC released its new Best Practices for Comprehensive Tobacco Control Programs. 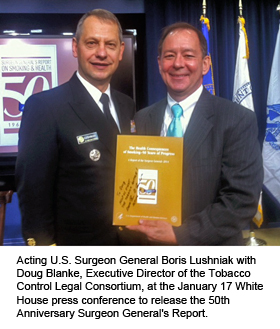 These recent developments help emphasize the message of the latest Surgeon General’s Report (SGR): while we should celebrate the progress that we’ve made in the 50 years since the release of the landmark 1964 SGR, we all need to move more aggressively to eliminate tobacco-related death and disease. This theme, articulated beautifully by Dr. Howard Koh, the Assistant Secretary for Health for the U.S. Department of Health and Human Services, and paraphrased plainly by me, appears throughout the anniversary SGR, “The Health Consequences of Smoking—50 Years of Progress.”

The new SGR describes the events surrounding, and the conclusions within, the 1964 SGR – the first ever report of its kind issued by the U.S. Surgeon General, focusing on the health consequences of smoking. While it explains that smoking-caused disease was among “the greatest public health catastrophes” of the twentieth century and that tobacco control is one of the public health community’s greatest successes, it shows that our efforts have stalled and queues up the evidence and talking points for future policy interventions to end the tobacco epidemic.

While the conclusions and key statements in the SGR are too lengthy for a blog post (and, really, the report is kind of lengthy for mere mortals – I recommend reviewing the executive summary), let me focus on a few key points:

“For 50 years the Surgeon General’s reports on smoking and health have provided a critical scientific foundation for public health action directed at reducing tobacco use and preventing tobacco-related disease and premature death,” states the new SGR. With all of the relevant information it lays out before us, the SGR is a valuable tool for addressing the tobacco problem. It looks like CVS is in. Who else is ready?