Home » About Us » Blogs » Preventing Nicotine Poisoning Among Children and Youth

Nicotine is an acute toxin that can cause vomiting, seizures, respiratory failure, and death if consumed in even a small dose. For example, one teaspoon of a solution with a nicotine concentration level of 1.8 percent could be fatal to a 200-pound person. A considerably smaller amount would be fatal to a child. 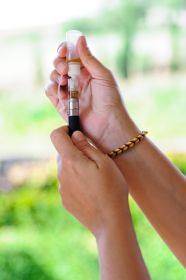 With the increase in the use of electronic cigarettes, there has been a corresponding increase in the number of child poisonings caused by the ingestion of liquid nicotine, or e-liquid, that is used in these products. Liquid nicotine is often sold in attractive packaging and in flavors that appeal to children, such as banana split, cotton candy, and Kool-Aid. In a recent news release, the Minnesota Department of Health noted that poisonings among young children reported to the Minnesota Poison Control System increased by 35 percent from 2013 to 2014, mirroring national trends. The first known death of an infant from e-liquid poisoning was reported in New York in December 2014.

Governments at the federal, state, and local level are beginning to address this issue. At the federal level, the U.S. Food and Drug Administration (FDA) has announced its intention to regulate non-cigarette tobacco products, including electronic cigarettes, through what has become known as the “Deeming Regulation.” Unfortunately, this regulation has not taken effect yet and the current version does not address the issue of e-liquid poisoning.Federal legislation requiring child-resistant packaging for e-liquid containers has been introduced, but has not been adopted into law.

Because of the federal government’s inaction, many state and local governments are beginning to tackle the problem of nicotine poisoning caused by e-liquid. The most common approach is a regulation requiring that containers of liquid nicotine be sold in child-resistant packaging. By the end of 2014, Minnesota, New York, and Vermont had adopted such laws, with many other states following suit in 2015. The requirements of these statutes vary, but they often use language borrowed from the federal Poison Prevention Packaging Act.

Another approach some jurisdictions have considered is requiring labeling of e-liquid containers. For example, Davis County, Utah, requires that e-liquid containers contain smear-resistant labels that include nicotine content, vendor name, and safety warnings.

It is possible that the e-cigarette industry would argue in response to these and other requirements that federal law preempts state and local authority. However, it is not clear what the FDA will do in this area, nor is it at all clear the extent to which a court would find that state or local regulations are preempted, if at all.

Other policies could also potentially reduce the risk of nicotine poisonings, albeit more indirectly. These could include adding e-cigarettes to smoke-free laws and youth access laws, licensing e-liquid retailers, and restricting the sale of flavored tobacco products, including flavored e-liquid.

Mike Freiberg, J.D., is a Staff Attorney at the Tobacco Control Legal Consortium at the Public Health Law Center at Mitchell Hamline School of Law.